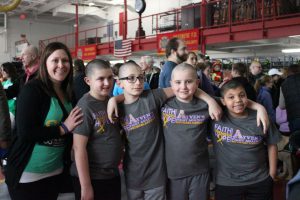 Members of the local community came together over the past few weeks to support childhood cancer research and to cheer on Ayven Trestick, a kindergartener from the Schalmont Central School District and the daughter of Pinewood Intermediate School teacher Kimberly Trestick, who was diagnosed with neuroblastoma at 15 months of age.

Students and teachers from Mohonasen and Schalmont and the Mohonasen National Honor Society banded together with Ayven’s family and friends as they participated on “Team Shavin’ for Ayven” and raised funds for the St. Baldrick’s Foundation. Some even “braved the shave” at an event on Sunday, March 26, to show solidarity with cancer patients and survivors, including a member of the Mohonasen National Honor Society and former student of Mrs. Trestick, Draper Middle School sixth graders, Draper teacher Matthew Rider, and several other team members, including two of Ayven’s cousins who are also kindergarteners at Schalmont. This year marks the fifth year that Team Shavin’ for Ayven participated in the fundraiser, and over the past four years, the team has steadily grown with new student and teacher volunteers.

Congratulations to Team Shavin’ for Ayven on contributing over $7,000 to the St. Baldrick’s Foundation — as donations continue to roll in!