Four area school districts have been recognized by the Capital District Regional Planning Commission (CDRPC) for creating a unique and successful approach to inter-district bus sharing.

At the Commission’s annual dinner on Wednesday, Oct. 18, representatives from the Burnt Hills-Ballston Lake, Mohonasen, Niskayuna and Scotia-Glenville school districts, as well as Capital Region BOCES’ leadership, were presented with the “Erastus Corning Achievement Award for Intermunicipal Cooperation.”

This collaborative bus sharing initiative is coordinated by the Capital Region BOCES, which nominated the districts to the CDRPC for recognition of their efforts to improve regional transportation planning and efficiency.

During the 2015-2016 school year, the school districts developed 18 shared bus routes to out-of-district locations, such as private schools, special education organizations, or BOCES programs. This helped consolidate repetitive or similar routes made by partially-filled buses at the individual districts.

The shared-bus route effort resulted in a first-year savings of $418,329, including costs for fuel, maintenance, and vehicle wear and tear. The savings have the potential to expand as additional routes are developed.

The effort also addresses the nationwide bus driver shortage through efficient route planning.
“What makes this award so special is that it acknowledges the collaboration and continued dedication of public school districts and BOCES to ‘think outside of the box’ for ways of providing safe and cost-efficient transportation of the students,” said Gregg Diefenbach, Deputy Director of Administrative and Management Services. 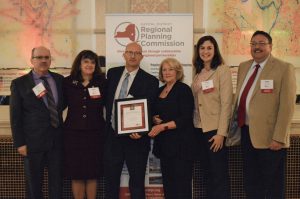 Initiative has the potential to be replicated at other districts

The nominated school districts have been tapped as partners in BOCES’ Department of State Local Government Efficiency grant, which provides funds to expand such cooperative models to districts throughout the greater Capital District. While still in its early stages, 18 additional districts have expressed interest in participating with this larger effort. Early estimates project the districts involved will see at least $2.04 million in cost savings once implementation is complete in the next three years.

The U.S. Department of Education states that $21.7 billion, or 4.2% of education funds nationally, are spent on transportation, similar to the 3% to 5.3% for the four districts.