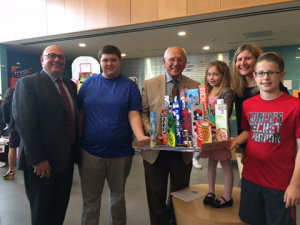 Mohonasen Central School District reflected on the value of vocational training and the opportunities it presents to students during National Manufacturing Day on Friday, October 6.

The district marked National Manufacturing Day with an event at the Center for Advanced Technology (CAT) to highlight the importance and viability of work-based learning for students looking to dive into potential careers or further educational opportunities after graduating high school.

Congressman Paul Tonko, State Senator George Amedore Jr. and Center for Economic Growth President and CEO Andrew Kennedy were joined by a number of school officials and students to share some success stories created because of these hands-on learning programs.

“Manufacturing Day was established to boost public perception of manufacturing, and to help people understand the interesting and rewarding opportunities that exist in manufacturing fields,” said Makensie Bullinger, Mohonasen Academic Administrator for Science and Technology.  Bullinger highlighted district STEAM programs – science, technology, engineering, arts and math. She noted the collaborative effort that exists at the CAT, a sentiment that was echoed by Capital Region BOCES Senior Executive Officer Joseph Dragone.

Among the student speakers was Samantha Petrosino, a 2017 Middleburgh High School graduate who was a student in the BOCES CTE welding program at the CAT. Once a school cheerleader, she’s now working in a predominantly male industry.  In just a few short weeks, Sam will head to the National University Polytechnic Institute in San Diego, California, where she will pursue a degree and certification in commercial diving/underwater welding.

“I wanted something that was hands-on,” said Petrosino. “I wanted to understand why I was learning it. I believe in higher education, but college isn’t for everyone. You have to find what you want to do, and thanks to this program, I know that going to a technical school is the right path for me.”

Dylan Hart, a Mohonasen work-based learning student, also shared how he is gaining experience that is preparing him for work after high school. “I love doing work for the bus garage,” Hart said. “It’s my favorite thing to do. I want to use these skills when I leave high school.”

Two elementary school students were also on hand to discuss their work on the “Cardboard Challenge.” The Cardboard Challenge is part of a global initiative that invites students from all around the world to build something amazing from their imaginations out of cardboard and recycled materials.

Of the more than 200 projects created by Bradt and Pinewood students as part of the Cardboard Challenge, 20 were selected by classmates to be displayed during Friday’s event, including 5th grader Connor McCarthy’s creation.

“It took me more than a month to make the Yankee Stadium,” said McCarthy. “I learned it was important to be patient and work hard. It was worth it when I was putting the score board up!”

Check out additional photos from the Oct. 6 event on the district’s Facebook page.