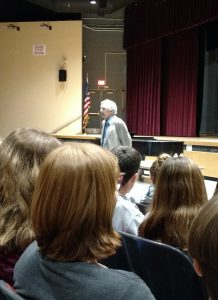 On Monday, June 6, Draper eighth grade students were visited by Holocaust survivor Murray Jaros who shared his story of fleeing the Nazis as a child in Poland during World War II.

Mr. Jaros’ visit was the capstone to the English language arts (ELA) unit of study on Holocaust literature. The curriculum has included reading the dramatic play version of the Diary of Anne Frank and excerpts from Elie Wiesel’s Night. The students also recently completed an interdisciplinary World War II research project combining what they have been learning in both ELA and social studies.

“According to the New York Times, there are only about 400,000 Holocaust survivors left in the world, and many are in their eighties and nineties,” said English teacher Melyssa Burega. “So for our students to hear first hand from a living survivor of that time is a privilege.”

Students listened carefully as Mr. Jaros told about how the Nazi soldiers stormed his home in rural Poland, beating his parents and grandparents and demanding money. The family was soon resettled in a ghetto but fled to live in the forest after hearing stories of SS soldiers murdering Jews. There they joined a small community of refugees who had to rely on the kindness of strangers for food. Jaros and his sister were eventually given false identities and kept safe, hidden among other local families.

Mr. Jaros told the students he wanted them to keep making the world a better place through kindness and responsible choices. He answered several questions from students and said he was impressed by their interest in learning about this time in history.

Thank you to Mr. Jaros for sharing his important story with our students!