The day was brought to fruition by a series of events, starting with a research project in Shaffer’s Participation in Government class. Students were encouraged to choose a topic for the project that they were passionate about, and to complete a research paper about the issues surrounding the topic.

“I don’t want students just doing a research paper. I want them to actually participate in what they are doing,” said Shaffer. “This year that meant the students had to interview a local community expert on their topic.”

When students were researching topics, Mohonasen school counselor Diane Blinn mentioned the advocacy organization, Hunger Action Network of New York State, calling for free universal lunches paid for by the state. Food insecurity is a topic that hits home for many students at Mohonasen and around the state.

This led to four students choosing the topic, “Should school lunches be provided for students by our government?”

After the topic was chosen, Board of Education president Wade Abbott mentioned to Shaffer that the New York State School Boards Association (NYSSBA) was holding a day of action at the Capitol to lobby for free school meals. One of Shaffer’s students, Yuliano Camarena, who had completed an internship at Paul Tonko’s office, heard about the advocacy event and reached out to Shaffer about attending the event with his fellow students.

When the day arrived, Shaffer, Wallace, who runs the Mohonasen food bank, and the four students made their way to the Capitol Building in Albany.

The students found themselves alongside NYSSBA and other interest groups such as local food banks and the American Heart Association in a lobbying effort to get a bill passed that guarantees free school meals for all. The group also set out to put pressure on Assembly members to have Governor Kathy Hochul include funding for  free school meals in the State budget.

Being the only young people at the event, the students quickly found themselves serving as the voice of the proposed program.

“It was the perfect opportunity for them to share real stories about how food insecurity has affected them and their classmates,” said Shaffer.

After speaking with the interest groups, students attended a press conference, where they were able to listen to a number of Assembly members speak on the matter.

Shaffer said he was proud of the way in which students represented Mohonasen.  “When you looked around the grandiose building, it was amazing to see our four Rotterdam students alongside a huge group of politicians,” Shaffer said.

Following the press conference, students met with a staff member from Assemblyman Angelo Santabarbara’s office along with multiple other lobbying groups. Each student told a personal story about how they or something they know have been affected by limited access to school lunch.

Shaffer said the students’ participation was impactful, and lobbyists had little to say following their comments. “How are adults going to drive that point home harder than our students who live it everyday?” stated Shaffer.  “The students really owned each room.”

Next they met with Senator Neil D. Breslin’s Chief of Staff, where they were again the only school-aged people in the room.

“The staffers really made me feel like mine and my peers’ stories were being heard and understood,” said student Grace Lyman. “They really took their time to listen to us and treat us like adults instead of writing us off as ‘some high school kids.’” 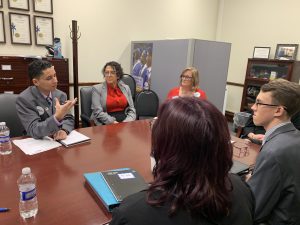 Our students at the table with Senator Breslin’s staff members

“You could tell the Chief of Staff was more interested in what our students had to say than any lobbyist,” said Shaffer. “This was an amazing opportunity for our Mohonasen students. They were in office rooms pitching ideas to the people who run the New York State machine. It was a really amazing day.”

Lyman added, “One of the things I’ve learned from this experience is how important it is for people to be involved in their community and everything it entails, regardless of age. Being a part of your community and advocating for what you believe is right can bring so many people together.” 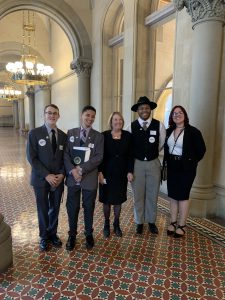 Our students with Senator Breslin’s Chief of Staff