Draper seventh-grader Alec Flansburg has been a lead drummer in the Capital District Youth Pipe Band.

But after the 2019 World Pipe Band Championships in Scotland this summer, now he’s also a World Champion.

He and the band, which also includes his sister Zoey Flansburg who is attending Tech Valley High School, competed against 20 other juvenile novice B bands.

Not only did the team collect the world champion title, Alec led the team to also win World Drumming Champion in the team’s performance class. The team is comprised of youth from New York, Vermont, Massachusetts, New Jersey, Pennsylvania, Virginia and Florida, combining their talents in a seamless ensemble. 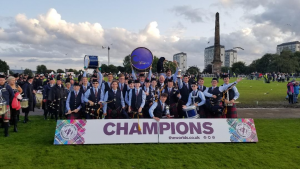