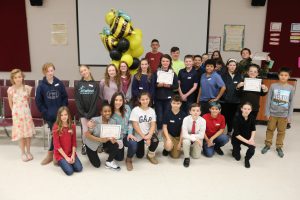 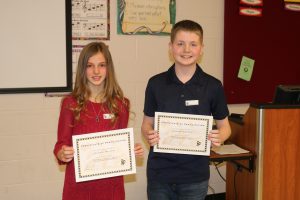 Nearly two dozen Draper Middle School students competed today for a spot at next month’s Capital Region Spelling Bee, but it was eighth-grader Connor Candee who emerged the winner with the correct spelling of the word transcendental after several rounds of tough competition. Connor’s closest challenger was sixth-grader Rachel Miller who went toe-to-toe with Connor during a lengthy battle that took the pair around the world with words like:

All of the words above were spelled correctly by the two Draper finalists. Competing in the 2019 Draper Spelling Bee were the following students, who won their classroom-level contests:

Connor now advances to the regional Bee, which will take place this year on February 13 at Proctors Theatre in Schenectady. The regional bee is held annually and determines which students from the Capital Region will travel to the nation’s capital to compete in the Scripps National Spelling Bee.

Best of luck to Connor and congratulations to all of our top spellers at Draper!