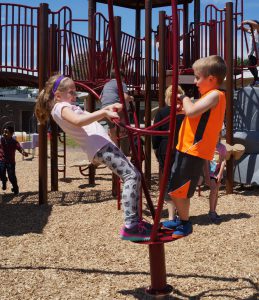 Squeals of delight filled the air as the ribbon was cut to officially open Bradt’s newest playground structure – quickly dubbed “the best playground ever” by an excited first grader.

Bradt students gathered on the lawn next to the playground area for the June 9 ribbon cutting ceremony, which Principal Leslie Smith said was years in the making.

“We are very excited to celebrate today the completion of the newest structures to our playground,” said Mrs. Smith.

In the fall, the Playground Committee and PTO members began to work together in order to bring the project to fruition this spring, she said. The new equipment includes a large play structure and two additional swing sets.

“This would not have been possible without the support of many folks,” said Mrs. Smith. Smith thanked Mohonasen’s building and grounds crew, including maintenance mechanic Kevin Hart, Pinewood building leader/custodian Joe Goodrow and Joe Mayo, director of buildings and grounds; school clerical staff; the PTO; Carmen Fire Department; and parent volunteers who helped assemble the structure. “Thank you also to our entire Mohonasen community, including our administrators, staff, students, parents and families, because without your support none of this would be possible.”

The structure was purchased with money raised through PTO fundraisers as well as a matching grant offered by the playground equipment company.

Mrs. Varano’s first grade class was chosen to test out the new equipment following the ceremony.