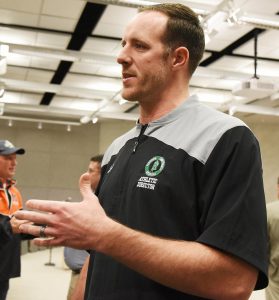 The Mohonasen Central School District welcomes Dave Austin as the new Director of Physical Education, Health and Athletics. Austin was appointed by the Board of Education on Sept. 10. Robert Stulmaker had been serving as interim director since August.

Austin, who will oversee the district’s athletic and intramural sports programs, coaching staff, physical education and health programs, said he is anxious to begin work at Mohonasen. His first day on the job will be Oct. 8.

“I’ve got a lot to be excited about,” the 34-year-old Austin told The Daily Gazette. “I see an athletic program on the rise with great athletic leadership. As Mohonasen transitions from the Suburban Council to the Colonial Council, there’s an opportunity to create new rivalries. A lot drew me to this position.”

Before coming to Mohonasen, Austin had served since 2014 as the Athletic Director for the Maple Hill, Schodack Central School District in Castleton. He was also a Health and Physical Education teacher at Maple Hill Middle School in the Schodack district since 2006.

Austin has also held several positions with the Patroon Conference including President, representative for the Section II Athletic Council and Section II Safety Committee. He was also site director for the Town of Schodack Day Camp.