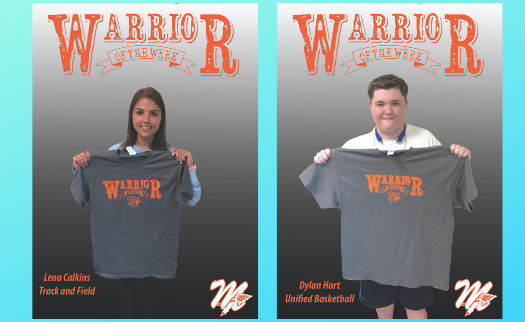 Congratulations to Dylan Hart (Unified Basketball) and Lena Calkins (Varsity Track and Field).  They are Mohonasen’s final WOW (Warrior of the Week) award winners of the year.  Each week, we will highlight one male and one female student-athlete (modified, JV or varsity level) for athletic accomplishments based on the following criteria:

Warriors of the Week – June 3

Dylan Hart led the championship winning Unified Basketball team to an 8-1 record. The senior guard was the team’s leading scorer and leader in minutes played. Dylan scored over 20 points twice, in wins against Gloversville and Scotia.
While his on court success is impressive, Dylan is also an incredible teammate. He’s always positive to the other players and coaching staff. Dylan is the first to congratulate his teammates and create a positive environment. He always seems to hit big shots too!
Lena Calkins (Track and Field)
Lena qualified for her 2nd straight NYS Championship Meet for outdoor track and field in pole vault.  She vaulted 11’3″, which tied her school record.  Overall, this is Lena’s 5th time representing Mohonasen in a NYS Championship Meet in either indoor or outdoor track and field.  Lena will compete in the pole vault on Friday at 3:30 at Middletown HS.

Kaleb Fretto
At the Colonial Council Track and Field Championships, Kaleb won the 100 meters, 200 meters and anchored the 4×100 team to help lift his team to a 2nd place finish at the meet.  Kaleb kept the momentum going into the weekend, where he advanced all the way to finals at the Eddy Meet in the 200m meters.  Well done, Kaleb!

Zionna Perez-Tucker
Zionna had an outstanding week, beginning at the Colonial Council Championship meet.  Zi came in 1st place in three events which included the 200 meter, 400m relay and 1600m relay.  She also placed 2nd in the 100 meter.  All in all, Zi contributed a total of 38 points for her team as they captured the Colonial Council championship.  At the Eddy meet, Zi was a member of the 400m relay that broke the school record and qualified for national championships.  Zi is the 12th ranked freshman in the 200m in NYS!

Warriors of the Week – May 6 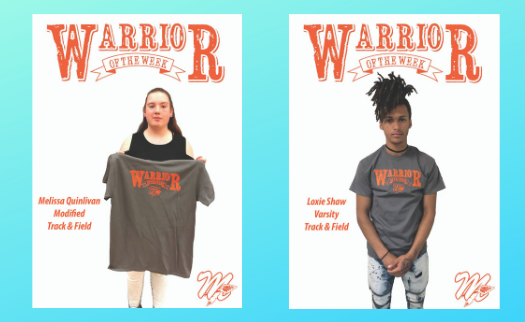 Loxie Shaw
Loxie and his team competed in The Futures Invitational on Friday, May 10th.  At the meet, Loxie won three events!  Those events were the 200 meters, long jump and the 4 x 400 relay.  Loxie ran the 200 meter in 22.97, a new meet record!  He anchored the 4 x 400 relay team, which defeated several schools from the Suburban Council.

Melissa Quinlivan
Melissa Quinlivan has been an excellent addition to the track and field program.  She is determined, self-motivated, hard working, and a natural leader by example.  She asked her coaches if she could stay after practice for an hour two days last week to practice her throws.  Her hard work paid off.  She threw two very impressive personal records at the track meet on May 9th.  For discus, she threw 63’8″ which improved on her previous PR by 11’5″!  For shot put, Melissa threw 20’0″ which improved her previous PR by 3’4″.

Warriors of the Week – April 29

Brendan Dunleavy
On April 30th against Lansingburgh, Brendan scored a goal and recorded five assists. The Schenectady-Mohonasen boys varsity lacrosse team would go on to win that game by the score of 18 to 5 to record their first win since becoming a merged lacrosse program. Aside from having a hand in 1/3 of his team’s goals, Brendan also had multiple ground balls and clears. Well done, Brendan!

Sara Toukatly
Sara had an excellent week last week. In three games, she collected six hits and drove in three runs.  She was also a dominant pitcher for her team. Against Cobleskill-Richmondville, she fired a no-hitter! In that game, she struck out 13 of the 17 batters that she faced. Congratulations, Sara!

Eric Starr
Eric plays on the varsity baseball team but is not physically able to play for the remainder of the season. However, Eric has continued to help serve his team.  He has remained one of the first players to arrive to practice and one of the last to leave. With his arm in a sling, he is retrieving foul balls, spotting the pitcher and catcher in between innings and picking up his teammates when he can. He is also the main reason the team took on Ben Parker as their manager this season. Eric has taken Ben under his wing and helped make him feel part of the team.

Ben Parker
Ben is a member of Mohon’s unified basketball team. In the first game of the season against Fort Plain, Ben scored 11 points, played excellent defense and was at his greatest when his greatest was needed. The team beat Fort Plain, 51-36.  He also makes time to serve as an assistant manager to the varsity baseball team. He even got to throw out the first pitch at a game earlier this season. We are proud of you, Ben!

Warriors of the Week – April 8

Matti Muller
Matti earned two victories on the mound over league opponents, Ichabod Crane and Schalmont, only surrendering one earned run in both games combined.  She also contributed offensively. She hit two doubles and drove in four runs in the victory. This past weekend, the team competed in the Scotia tournament, where Matti earned another win on the mound.

Elijah Harris
Elijah won the high jump in last Tuesday’s league meet against Schalmont and Cobleskill.  Then, at the Niskayuna Warrior Classic, Elijah won the high jump with a personal best 6’4″.  This was also a meet record for the invitational. He beat the next closest competitor by six inches and automatically qualified for the New York State Championship in June.

Warriors of the Week – April 1

Natalia Sawyer
Natalia won the 200 m and 400 m dash in Mohonasen’s Colonial Council opener on Tuesday, April 2nd.  On Saturday, April 6th the girls track team competed at the New Paltz Invitational where Natalia won the 400 m dash over 54 other competitors!  In doing so, she broke the school record for the 400 meters.  In addition to winning this event, Natalia was on the 400 m relay team that won 1st place and the 1600 m relay team that placed 2nd.  All in all, Natalia contributed 28 points at the invitational for her team.

Jonathan Caffarella
In Mohonasen’s league opener win at Lansingburgh, Jon had two hits and scored the go-ahead run for his team.  Jon also contributed on defense.  Jon struck out 8 batters in three innings to record the save after entering the game with the bases loaded in the 5th inning. Jon’s coaches note that he leads by example. He never complains and gives his best effort at all times.