Home > > Students display work at the Reimagining the 4 Freedoms exhibit.

Students display work at the Reimagining the 4 Freedoms exhibit. 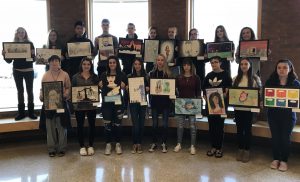 Students from our High School Studio Art classes had their work on display at the Norman Rockwell Museum as part of the Reimagining the 4 Freedoms exhibit.

This event was one of a kind for Capital Region students enrolled in the foundational course, Studio Art. The exhibition commemorated former president Franklin Delano Roosevelt’s 1941 State of the Union speech, in which he believed every American was entitled to Four Freedoms. Norman Rockwell, a 20’th-century American painter and illustrator duplicated these Four Freedoms in a poster series. This poster series is celebrating its 75 anniversary. To honor this occasion, students were asked to create a work of their own, which reimagines what the Four Freedoms may be in 2018.

This exhibition was representative of 100 + works from seven surrounding Capital Region school districts. It was held in conjunction with National Youth Art Month and was sponsored by the Norman Rockwell Museum, the Capital Area Art Supervisors (CAAS), Region 6 and the New York State Art Teachers Association (NYSATA).